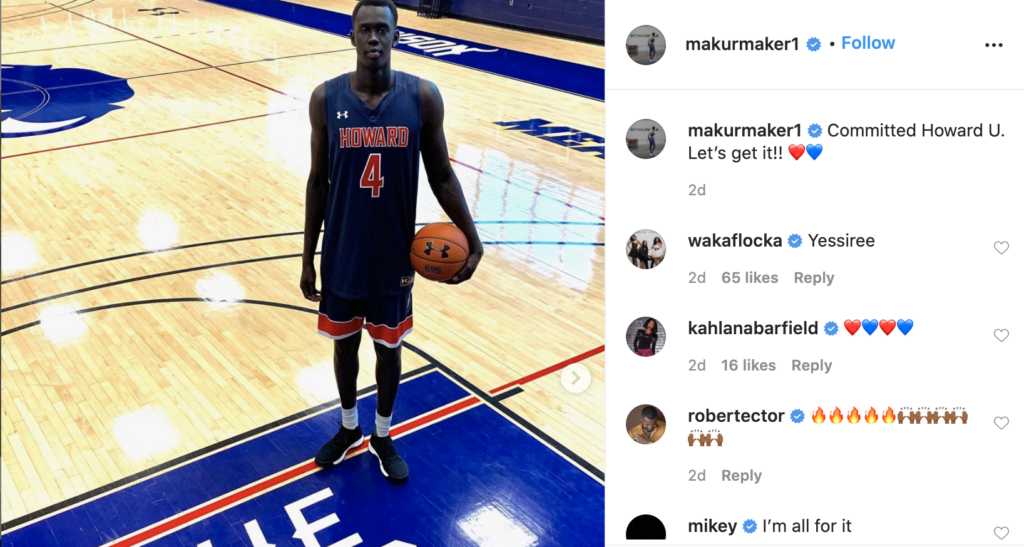 The Game Has CHANGED

Five-star senior Makur Maker announced his commitment to Howard on Friday morning, becoming the highest-ranked college basketball prospect to commit to a historically Black college or university since the ESPN recruiting database started in 2007.

Maker chose the Bison over UCLA, although Kentucky and Memphis were also on his final list of four schools.

“I was the 1st to announce my visit to Howard & other started to dream ‘what if,'” Maker wrote on Twitter. “I need to make the HBCU movement real so that others will follow. I hope I inspire guys like Mikey Williams to join me on this journey. I am committing to Howard U & coach Kenny Blakeney.”

“A lot of people are comfortable with familiarity. Kids could say, ‘I would feel welcome that I’m not just an athlete — I’m part of a community,'” Ed Smith, Maker’s guardian, told ESPN recently. “On the visit at Howard, that was the main difference. Just for me on the outside looking in, he’s part of the fabric. You’re not just the athlete or the Black athlete.”

Maker, a versatile 6-foot-11 frontcourt player, is ranked No. 16 in the ESPN 100 for 2020. He also entered his name into the NBA draft, but he is likely to withdraw if he’s not expected to be a first-round pick. Maker is ranked No. 75 in ESPN’s NBA draft rankings. There have been links between Maker and the G League, but sources have told ESPN he isn’t interested in going that route.

Maker is the first five-star prospect to commit to an HBCU since the ESPN recruiting database began, and if selected in the NBA draft, he would be the first such HBCU product since Kyle O’Quinn (Norfolk State) in 2012. But over the past couple of months, HBCUs have become more assertive in recruiting top-tier high school talent, especially in the 2021 and 2022 classes.

Blakeney, who took over at Howard before last season, spoke to ESPN recently about the potential impact of a five-star prospect at an HBCU — and the importance of the prospect succeeding.

“Wherever a five-star lands, we can’t mess it up,” Blakeney said. “If we mess it up, we may not have another opportunity to be able to do it.”

Maker, the cousin of Detroit Pistons forward Thon Maker, was born in Kenya before moving to Australia. He moved to California in 2015. Makur Maker averaged 14.7 points and 7.9 rebounds while shooting 73% on 2-pointers last spring and summer with Dream Vision on the Adidas grassroots circuit.