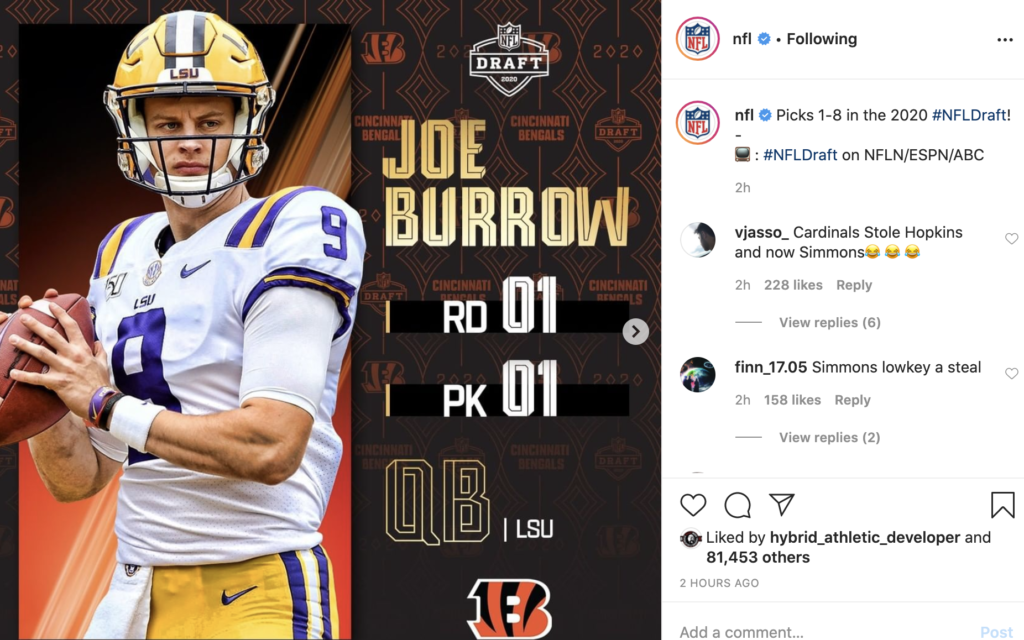 The Cincinnati Bengals have their next franchise quarterback.

Months of speculation ended on Thursday when the Bengals selected former LSU standout Joe Burrow with the first overall pick in the NFL draft. With this year’s event taking place virtually because of the coronavirus pandemic, Burrow celebrated with his family and put on a Bengals hat from his home in Athens County, Ohio.

It was quite the rise for a player whom ESPN’s Mel Kiper had pegged as a sixth-round draft pick entering the 2019 season. And Burrow said on ESPN’s draft broadcast that he would have laughed if someone told him at this time last year that he’d be the top player selected.

“I would have told you you were crazy,” Burrow told ESPN’s Suzy Kolber. “I knew I was going to have a really good season because I knew we had really good players coming back, we had great coaches and we were going to work really really hard to do it, but to jump up to No. 1 overall is crazy to me. It’s a dream come true.”

Burrow said the key to his success was simple.

Ohio State teammates were the next two players selected as defensive end Chase Young went second to the Washington Redskins and cornerback Jeff Okudah went third to the Detroit Lions. It marks the first time in the common draft era that the three top picks were teammates at some point in college. Burrow, Young and Okudah all played for Ohio State before Burrow transferred to LSU.

Bengals president Mike Brown officially welcomed Burrow to Cincinnati on Wednesday when he sent Burrow a letter that said, among other things, that he looks forward “to building championship football teams with you for many years to come.” Brown also sent Burrow and his parents No. 9 Bengals jerseys — which is the number he will be wearing in Cincinnati.

Cincinnati finished 2-14 in 2019, which gave the club the top slot in the first round. The Bengals hadn’t been in that position since 2003, when they drafted USC quarterback Carson Palmer with the top overall pick.

Even though Cincinnati didn’t have a private workout with Burrow because of the global coronavirus pandemic, the 23-year-old had plenty of tape from his final season at LSU that showed why he was the first quarterback selected in this year’s draft.

In 2019, Burrow won the Heisman Trophy after completing a staggering 76.3% of his passes for 5,671 yards and 60 touchdowns — the most ever by an FBS quarterback. He led LSU through an undefeated season; the Tigers beat Clemson to win their first national championship since 2007. Burrow’s Total QBR of 94.9 led all quarterbacks last season, according to ESPN Stats & Information research.

Burrow and Cam Newton (2011) are the only quarterbacks since 1967 to be the top draft pick after winning both the Heisman and the national championship. Newton capped his collegiate career at Auburn with a national title before being drafted by the Carolina Panthers.

When the Bengals convene to start in-person workouts, Burrow is expected to compete for the starting job immediately. Veteran quarterback Andy Dalton, who has been the franchise’s primary starter since he was selected in the second round of the 2011 draft, is entering the final year of his contract. The Bengals are not expected to have the space for Dalton’s $17.7 million hit against the salary cap.

Cincinnati hasn’t won a playoff game since the 1990 season, the longest drought in the NFL. The Bengals are looking for their first postseason appearance since 2015.

Burrow is the 318th No. 1 overall pick in NFL, NBA, NHL, MLB, WNBA and MLS history. But he’s the first to win national player of the year, a national title, and break a single-season NCAA record in his final college season.