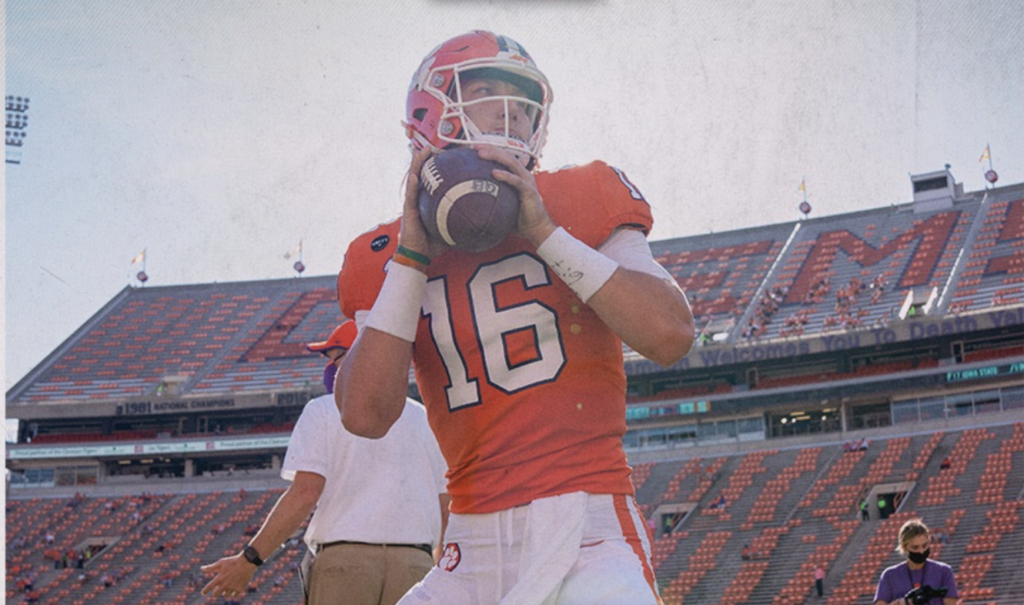 Trevor Lawrence, junior quarterback for the No.1-ranked Clemson Tigers and front-runner for the Heisman Trophy, will not play in Saturday’s game against Boston College after testing positive for COVID-19. Clemson coach Dabo Swinney announced the news Thursday night in a statement.

“Trevor has authorized us this evening to announce that he has tested positive for COVID-19 and is now in isolation,” Swinney said. “He is doing well with mild symptoms but will not be available for this week’s game against Boston College.

“While we certainly will miss Trevor, this is an opportunity for other guys to step up and we’re excited about competing against a very good BC team on Saturday. Go Tigers.”

Lawrence has completed 70.7% of his passes for 1,833 yards with 17 touchdowns and two interceptions in leading Clemson to a 6-0 record and the top spot in the USA TODAY Amway Coaches’ Poll.

The Tigers are scheduled to play at Notre Dame a week from Saturday.

According to ACC COVID-19 protocols, players who test positive “shall be isolated for at least 10 days” from the onset of their first positive test. A person with knowledge of Clemson’s testing procedures told USA TODAY Sports the Tigers are tested for COVID-19 on Sunday, Wednesday and Friday. This would suggest Lawrence tested positive on Wednesday, which could put him in line to return for the game against the No. 4 Irish.

The person requested anonymity because of the sensitivity of the subject.

Shortly after the release of Swinney’s statement, Lawrence released a statement of his own on his Twitter account.

“I have tested positive for COVID-19, and my symptoms have been relatively mild while I’m following the protocol from Clemson and the ACC,” Lawrence wrote.

“The only thing that hurts is missing an opportunity to be with my teammates this weekend and play the game I love. I hate that I can’t be there, but I’ll be watching from isolation and pulling for our guys while I wait for the opportunity (to) rejoin the team. Gold bless and Go Tigers!”

Lawrence is expected to be replaced by true freshman D.J. Uiagalelei, a five-star and one of the top prospects in the 2020 recruiting class. Uiagalelei has played in five of Clemson’s six games and completed 12 of his 19 attempts for 102 yards and rushed for two scores.

Lawrence, after guiding Clemson to a national championship as a freshman and putting up gaudy statistics over 2½ seasons, is expected to be the No. 1 overall pick in the 2021 NFL draft.

However, he has recently appeared to leave the door open that he might return for his senior season.

“I don’t know, we’ll just have to see how things unfold. There’s a lot of factors in that,” Lawrence said on a Zoom call on Tuesday.

“My mindset’s been that I’m going to move on, but who knows?” he continued. “There’s a lot of things that could happen. I’m just really focusing on this year and not trying to look ahead. … That’s a tough one, but we’ll see how it all unfolds.”