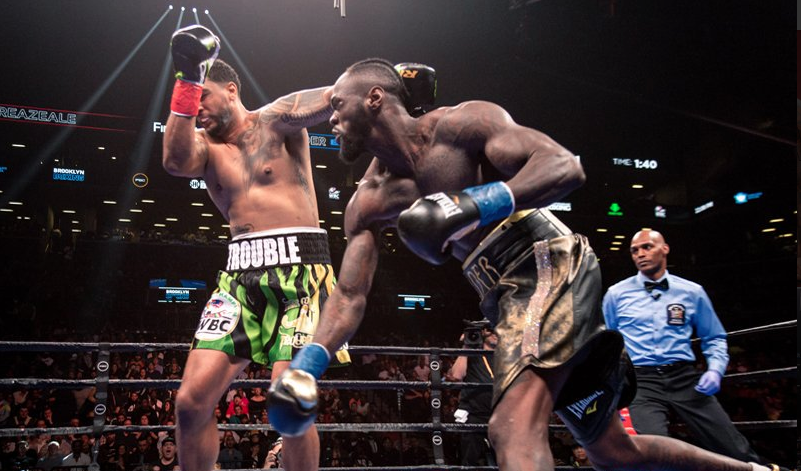 That @BronzeBomber KO was so insane last night we had to give it to you through different angles (thread). Videos via @CBSSports pic.twitter.com/dPS6LAwY2t

Why Would ANYONE Fight This Man?

Deontay Wilder reminded anyone who may have forgotten why he is such a fun fighter to watch.

The WBC heavyweight champion remained unbeaten Saturday at the Barclays Center by landing perhaps the best right hand of his career, connecting with a short right cross on the chin of Dominic Breazeale and finishing the bout with that one shot.

Wilder set up the right with a range-finding jab. After the jab landed, he unloaded with a short right. Breazeale went down hard on his back and couldn’t beat referee Harvey Dock’s 10-count. The end came at 2:17 of the first, improving Wilder’s record to 41-0-1 with his 40th knockout.

Wilder had said in the pre-fight build-up that he wanted to kill Breazeale, and several times said he wanted a body bag on his record. He didn’t come close to doing that, but he ended the fight as emphatically as he could.

It’s why he’s one of the most compelling figures in the sport.

“I had so much inside I had to endure and that I had to overcome, even with the training. There were many times my body was hurting. I just told Breazeale I love him and of course I wanted to see him go home to his family. I know we say some things we mean sometimes, but then when you get into a fight and you settle your differences as men and you hold these gloves, this is what the sport is all about.”

Wilder, who was coming off of a draw with lineal champion Tyson Fury, gave the best news after the fight. He said the rematch with Fury will happen, and though he never mentioned IBF-WBA-WBO champion Anthony Joshua by name, he promised he’ll fight Joshua as well.

Luis Ortiz, whom Wilder knocked out a year ago, entered the ring and there was talk of a rematch between them. But the fight everyone wants — Wilder versus Joshua — is the one that Wilder said would happen.

“That fight [with Fury], the rematch, will happen, just like all these other big fights will happen,” Wilder said. “The great thing about it is, all these fights are being discussed. No doors are closed. All teams, all parties who are involved are talking.”

Wilder made everyone antsy to see him fight Joshua with that one punch. If Joshua does his part in two weeks, the demand may finally boil over.