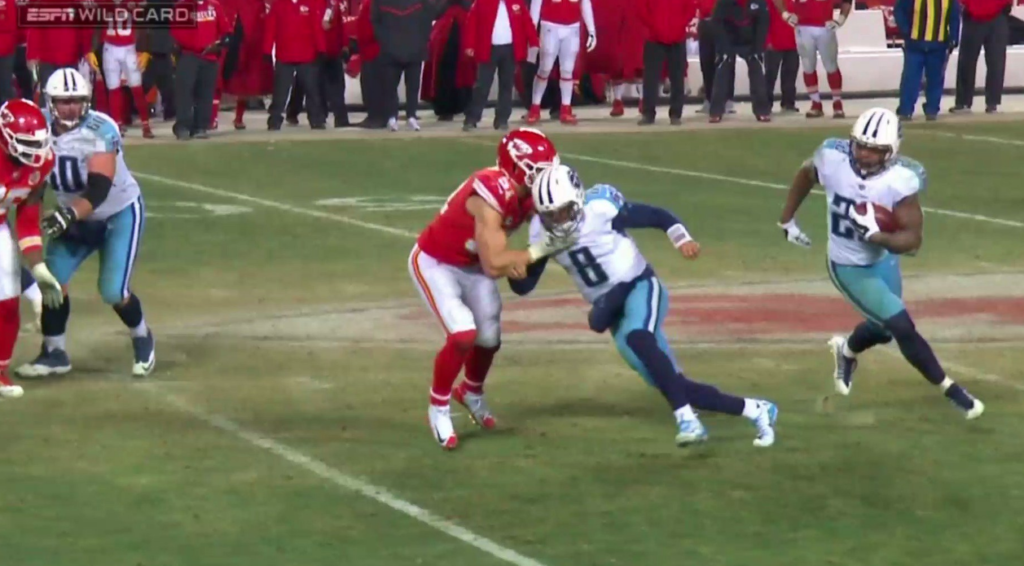 Marcus Mariota just caught his own pass for a @Titans TD!!

The Tennessee Titans erased an 18-point second-half deficit to rally past the Kansas City Chiefs for a 22-21 wild-card win.

Marcus Mariota sparked the comeback by getting Tennessee its first touchdown after catching his own deflected pass in the third quarter to reduce the deficit to 21-10. A 35-yard run by Derrick Henry further cut into the Chiefs’ lead before Eric Decker’s 22-yard catch gave the Titans their first lead.

Mariota, who delivered a key block on Henry’s game-clinching run in the fourth quarter, finished with 205 yards and two touchdown passes with one interception.

Tennessee became just the second team in NFL history to win a playoff game after trailing by 18 points or more in the second half. The win was the organization’s first playoff win since the 2003 season.

Kansas City controlled the first half, gaining 264 yards. But tight end Travis Kelce’s concussion shortly before halftime derailed the passing game, as quarterback Alex Smith struggled to replicate his early success as the offense was held scoreless in the final 30 minutes.

The Chiefs were briefly given a glimmer of hope in the final two minutes when an apparent Henry fumble was returned for a score by linebacker Derrick Johnson, but reviews revealed the running back was down by contact.