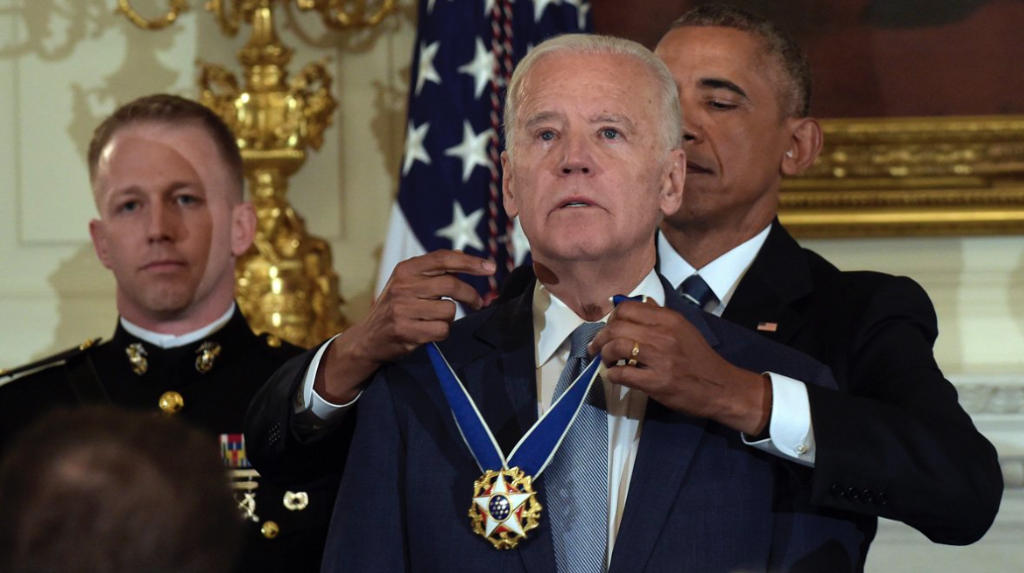 At the dusk of both of their political careers, surrounded by teary friends and family, President Barack Obama on Thursday bestowed the Presidential Medal of Freedom on Joe Biden, the man he called “the finest vice president we have ever seen.”

The vice president winced in shock as Obama announced he was conferring the nation’s highest civil honor on his right-hand-man for eight years. Biden turned away from the cameras, wiped away some tears, then stood stoically as Obama draped the blue-and-white ribbon around his neck.

“I just hope that the asterisk in history that is attached to my name when they talk about this presidency is that I can say I was part of the journey of a remarkable man who did remarkable things for this country,” Biden said.

There were standing ovations – several of them – at what had been billed as a modest farewell ceremony for Biden but evolved into a surprise bestowal of the Medal of Freedom, the last time Obama will present the honor.

“I had no idea,” Biden said of the award, insisting he didn’t deserve it.

It was the only time Obama has presented the medal “with distinction,” also awarded only once by each of the previous three presidents.

One week out from the Obama administration’s end, a deep sense of nostalgia set in at the White House as longtime staffers pack up their offices, send out their last emails and bid farewell to the president they’ve served. On Tuesday, Obama returned home to Chicago to deliver his valedictory address, and next week he’ll depart Washington as ex-president just after President-elect Donald Trump is sworn in.

Obama, joined Thursday by his wife and daughters, was effusive in his praise for the man who ran against him in 2008, then agreed to be his running mate. He said Biden had made him a better president, calling him “a lion of American history.”

“To know Joe Biden is to know love without pretense, service without self-regard and to live life fully,” Obama said.

The famously plainspoken Biden has long said he only agreed to the job after Obama agreed he would be the last person in the room before major decisions were made. Over two terms, they developed a bond that both men said transcended the office, with their wives, children and Biden’s grandchildren becoming close friends.

They disagreed, too, on occasion, including when Biden advocated against the high-stakes raid that killed Osama bin Laden. Biden’s tendency to veer off-script caused occasional headaches for the White House, such as when he unexpectedly announced support for gay marriage in advance of the 2012 re-election, forcing Obama to do the same soon after.

Yet as they gathered for a final goodbye, none of that seemed on either man’s mind.

Obama said there had been “no turf wars between our staffs,” a departure from other recent administrations. And Biden told the story of how after his son Beau Biden died in 2015, leaving behind a wife and children, Obama was distraught when Biden said he might sell his house to help support them, and offered to give them money instead.

It was a reunion for the many staffers and colleagues who worked with Biden over the years. Joining Biden’s wife, sister and children in the State Dining Room were former Sens. Chris Dodd and Ted Kaufman, former chief of staff Bruce Reed, and even Biden’s White House physician.

Obama traced the history of Biden’s nearly half-century-long political career, from chairing the Senate Judiciary and Foreign Relations committees to the “cancer moonshot” effort he started recently and plans to continue. Obama praised his vice president for his work on the economic stimulus, middle-class issues and curbing violence against women.

“I’ve not mentioned Amtrak yet, or aviators. ‘Literally,'” Obama said, invoking a few of the more famous “Bidenisms.”

Biden’s career in Washington started in 1972 steeped in tragedy when his wife and infant daughter died in a car crash just before he was to be sworn in as U.S. senator. After exiting the national stage next week, he plans to stay active in Democratic politics and work on policy issues at a pair of institutes he’s developing at the University of Delaware and the University of Pennsylvania.

His folksy demeanor lent itself to plenty of jokes and caricatures, like the series of photos of Biden eating ice cream that exploded on social media. But Obama seemed fonder of the internet meme based on photos of him and Biden buddying it up.

“This also gives the internet one last chance to talk about our bromance,” the president said.