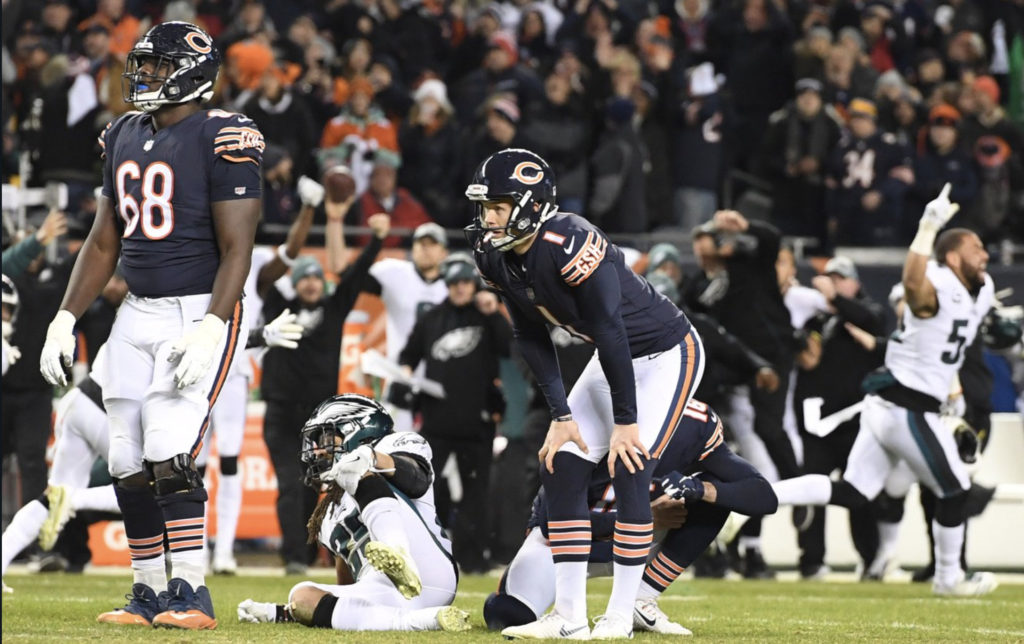 Mitchell Trubisky put the Chicago Bears in position Sunday night for a game-winning field-goal to slay a Philadelphia Eagles team that won’t die.

Cody Parkey lined up for a 43-yard attempt.

The boot hit the left upright, caromed down, glanced off the crossbar and ricocheted into the end zone.

“I feel terrible,” Parkey said after the game. “There’s really no answer to it. I thought I hit a good ball.”

Trailing 15-10, Foles recaptured his January magic, leading a 12-play, 60-yard touchdown drive, culminating with a fourth-down sidearm sling to Golden Tate. After missing the 2-point try, Philly kicked off with a 16-15 lead.

Tarik Cohen took the ensuing kickoff 35 yards to set up the Bears at the 42-yard-line with 48 seconds remaining.

Trubisky tossed a beautiful strike to Allen Robinson for 25 yards to put the Bears in field goal range. After another 8-yard pass, Chicago settled on the 25-yard-line. After a spike and a throwaway, Parkey trotted out for his chance to be a hero.

On the season, Parkey went 23 of 30 on field goals, with some big misses. Sunday night was his opportunity to change the narrative.

As the Bears lined up for the attempt, Eagles coach Doug Pederson called timeout before the snap — Parkey made the boot on a practice try.

Icing the kicker worked in the Windy City.

Parkey’s boot leaked left the whole way before smacking the upright. The Double Doink was born.

“It’s one of the worst feelings in the world to let your team down,” Parkey said. “I feel terrible. Continue to put things into perspective, continue to just put my best foot forward and just sleep at night knowing that I did everything in my power this week to make that kick and for whatever reason it hit the crossbar and the upright.”

The miss was a brutal way for the 12-4 Bears to see the season end after their first NFC North title and playoff appearance since 2010.

All the blame doesn’t fall on Parkey — the defense couldn’t stop Foles on the final drive, and the offense was stymied early — but after Trubisky matched Foles’ magic to put Chicago in position to win, it’s a heart-wrenching way to lose for Bears fans.