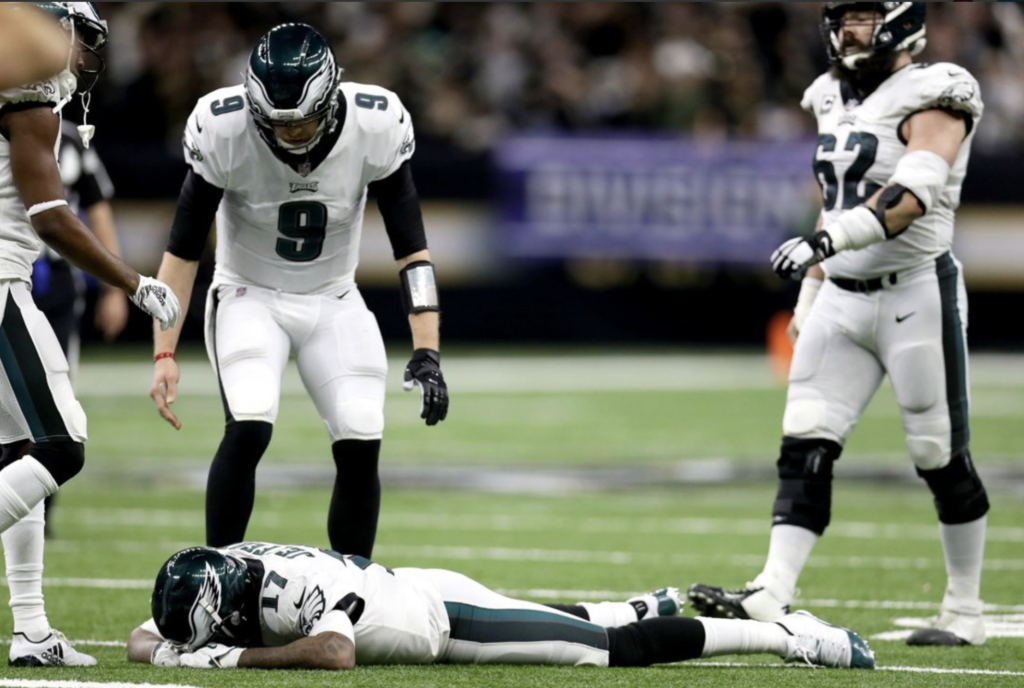 Receiver Alshon Jeffery took responsibility for the Philadelphia Eagles’ divisional-round loss to the New Orleans Saints on Sunday following a dropped pass late in the game that led to a critical interception.

The Eagles had new life after a missed field goal by Saints kicker Wil Lutz and got the ball back with just less than three minutes remaining and trailing by six. They moved deep into Saints territory following Nick Foles’ 16-yard completion to Zach Ertz and a roughing the passer call. Their fortunes shifted on second-and-10 from the New Orleans 27-yard line, though, when Foles’ short pass for Jeffery went through the receiver’s hands and was intercepted by Saints cornerback Marshon Lattimore.

Jeffery lay face down on the turf for a moment before heading to the sidelines, where he watched part of the Saints’ game-sealing drive with his hands on his helmet. Teammates took turns consoling Jeffery, telling him that the late-season surge and last year’s Super Bowl run wouldn’t be possible without him.

“He’s one of the best players on this football team. That game wasn’t decided by that play, number one,” tight end Zach Ertz said. “Two, we wouldn’t change the play call. And three, we’re not in this situation without him. That’s the bottom line. He is one of the best receivers in the league. There are not many guys who are able to make plays continually like he does. Does he catch that ball 99 times out of 100? Yeah. [Does he catch it] 999,999 out of a million? Yeah. It’s tough to end like that  but he should know that play didn’t decide this game.”

It was only Jeffery’s third drop of the season.

According to right tackle Lane Johnson, Jeffery has been playing the season through broken ribs. Last season, he played through a torn rotator cuff.

“There’s nobody that works harder. The guy has broken ribs and toughed it out for his teammates. He doesn’t have to say nothing. We had plenty of opportunities to win this game. It’s not one guy’s fault.”

The Eagles jumped up 14-0 on New Orleans with touchdowns on their first two possessions, but were blanked the rest of the way. Jeffery led all Philly receivers with five catches for 63 yards. He finished second on the team behind Ertz in catches (65), receiving yards (843) and receiving touchdowns (6) during the regular season.

“It happens to the best of us,” Jeffery said of the drop. “We move on. It hurts right now, but I guarantee you we’ll be back next year, for sure.”