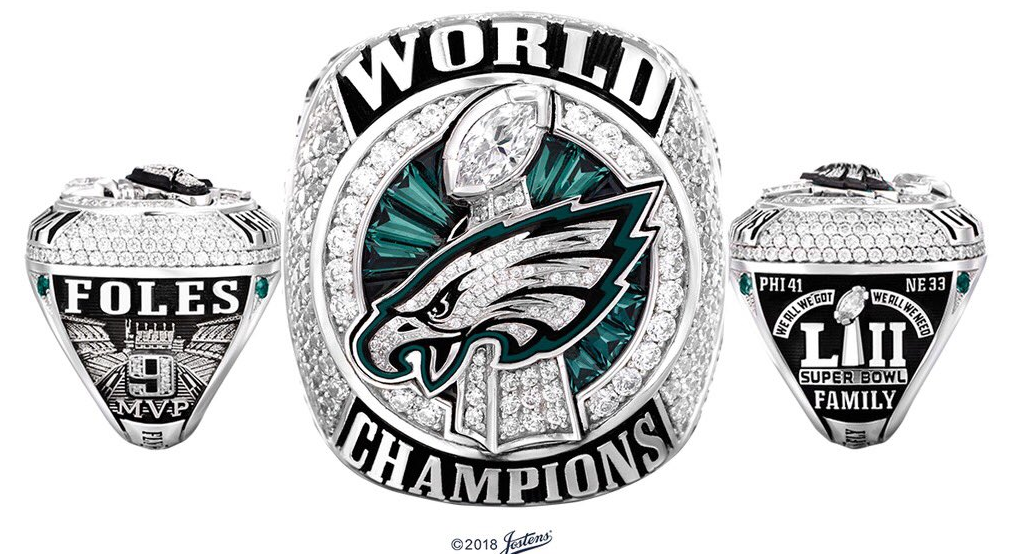 After their Super Bowl LII win, the Philadelphia Eagles organization held a meeting to discuss what the championship rings should look like. It was suggested there that perhaps they “should go the elegant route” with the design.

“And all the players jumped forward and said, ‘No, no no. The bigger and the bling-ier, the better,'” Eagles owner Jeffrey Lurie told reporters on his way into the ring ceremony Thursday night, “and that’s what we did.”

No detail was overlooked. There is a waterfall of 127 diamonds on the bezel paying tribute to the “Philly Special,” representing the sum of the jersey numbers of the three players who handled the ball post-snap: Corey Clement(30), Trey Burton (88) and Nick Foles (9). There is also an “underdog” mask inscribed on the inside of the ring.

The rings are made of pure 10-karat white gold, each containing a total of 219 diamonds and 17 green sapphires. The commonly heard refrain “We All We Got, We All We Need” and the word “family” are also featured.

“It was an incredible season, and I wanted this ring to represent all the love, dedication, trust and resilience of this football team and this organization,” Lurie said. “This ring is for all of us, and I’m very, very proud of what we’ve accomplished.”

The team gathered for a private event at 2300 Arena in South Philadelphia. The band was back together for one night, as former players and coaches including tight end Brent Celek, running back LeGarrette Blount, Minnesota Vikings offensive coordinator John DeFilippo and Burton, the thrower of the “Philly Special,” joined in the festivities. The rings were handed out one by one, complete with a highlight video of each team member playing on a large video screen as they walked up the aisle and received the hardware from Lurie.

“Tonight we’re here to celebrate an amazing and great victory by receiving as an entire organization our world championship rings,” Lurie said. “This is our first Super Bowl win. I’ve always believed it takes a village to win a championship. All of you in this room are our village.”

Now that they have their rings, coach Doug Pederson says he believes it’s time to put an end to the celebration tour.