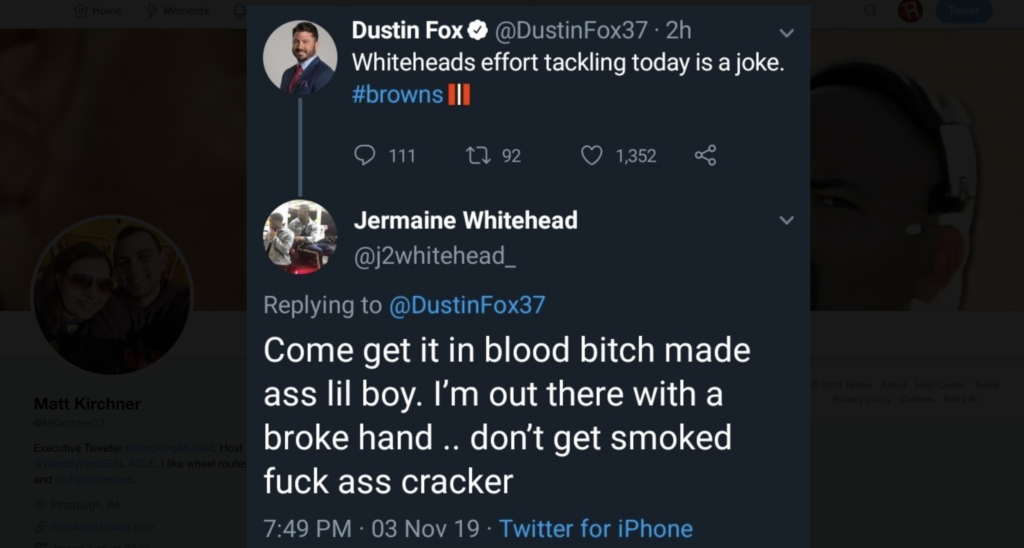 Shortly after the Browns lost to the Denver Broncos on Sunday, Cleveland safety Jermaine Whitehead went on a profane Twitter rant that included racist language and death threats.

He was cut soon after.

The tweets were targeted at Twitter users critical of his and the Browns’ performance with one aimed at Browns TV and radio broadcaster Dustin Fox after Fox tweeted that “Whitehead’s tackling today is a joke.”

Whitehead responded with a slur and a warning to Fox not to “get smoked.”

Fox wasn’t the only Twitter user in Whitehead’s sights. He responded to several other critics with tweets that included a death threat, a place to meet and another use of the slur he used against Fox.

The Athletic’s Zac Jackson reported that Whitehead was still wearing his uniform when he was sending the tweets and that a team public-relations staffer separated him from media in the postgame locker room, where Whitehead did not speak with reporters.

Later on Sunday evening, the team addressed Whitehead’s tweets and confirmed that the rant came from his account.

“Jermaine Whitehead’s social media posts following today’s game were totally unacceptable and highly inappropriate,” the statement reads. “We immediately spoke with Jermaine upon learning of these comments. The Browns in no way condone that type of language or behavior. This matter will be further addressed internally.”

The team did not clarify what steps would be taken.

Whitehead is a fourth-year pro who originally signed with the San Francisco 49ers as an undrafted free agent in 2015. The Browns claimed him off waivers last season after the Green Bay Packers released him.

Whitehead has played in all eight Browns games this season, tallying 41 total tackles and a forced fumble. He did not register a defensive stat against the Broncos.