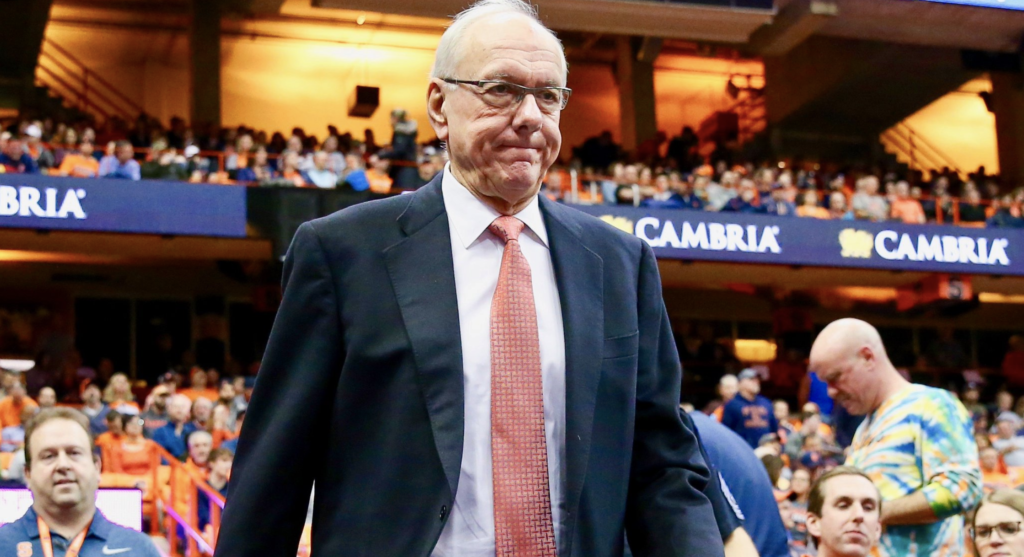 Syracuse police say 51-year-old Jorge Jimenez was an occupant in a black Dodge Charger with three others when they apparently lost control on a patch of ice and hit a guardrail before midnight Wednesday on I-690 in Syracuse.

Boeheim struck Jimenez with his GMC Acadia while trying to avoid the disabled car, which was resting perpendicular on the darkened highway. The group had been heading toward the median for safety. Jimenez was taken to a hospital, where he was pronounced dead. Another man in the group suffered minor injuries in the accident, police said.

“I am heartbroken that a member of our community died as the result of last night’s accident,” Boeheim said in a prepared statement. The 74-year-old Basketball Hall of Fame coach said he and his wife Juli “extend our deepest sympathies to the Jimenez family.”

He said he would not comment further “out of respect for those involved.”

Police said Boeheim has been cooperating with the investigation. He even used his cellphone light to warn other drivers of the disabled car after the accident, police said.

“At this time we have no reason to believe that there are criminal charges that will be coming for anyone,” Syracuse Police Chief Kenton T. Buckner said at a news conference.

Police said sobriety tests administered to Boeheim and the unidentified driver of the other vehicle were negative for any signs of impairment. Onondaga County District Attorney William Fitzpatrick said he has known Boeheim for 40 years and that the coach does not drink.

No tickets have been issued to Boeheim at this time and the investigation is continuing.

“This story obviously is newsworthy because of the notoriety of the coach,” Fitzpatrick said. “But this is the loss of a human being. It was an accident in the purest sense of the word.”

Jimenez’s daughter told the Post-Standard he was with friends buying cigarettes when he was killed. Yurisandy Jimenez Arrastre described her father — a native of Cuba who lived in the United States for 20 years — as a family man who loved to cook and tell jokes.

“My father was a man who was very sociable, very happy. He loved to help everybody without question,” Arrastre told the newspaper in Spanish. “He loved having friends.”

He met his wife, his daughter and some friends for a dinner out after the game and was driving alone from the restaurant, Fitzpatrick said. The scene of the accident is between the dome and Boeheim’s suburban home.

“It’s just a terrible, unfortunate accident,” Fitzpatrick told ESPN. “We don’t yet know [exactly] what caused the initial accident. Coach Boeheim was not involved in that accident. The occupants of the vehicle, including the deceased, were wandering in the road.”

It is not clear if Boeheim will coach the Orange against No. 1 Duke on Saturday night. ESPN’s College GameDay was supposed to originate from the Carrier Dome, but a decision was made Thursday afternoon to have GameDay air from Bristol.

“We appreciate their concern for our community during this difficult time,” Syracuse athletic director John Wildhack said in a statement.

He added that the university sent its condolences to “all impacted by this tragic accident.” Wildhack echoed police, saying Boeheim “is in contact with local authorities and cooperating fully.” Wildhack said Boeheim met briefly with his team Thursday but did not attend or participate in practice.

Boeheim has coached at Syracuse, his alma mater, since 1976 and is one of the most accomplished coaches in the country. He ranks second all time in wins in Division I with 944, behind only Duke’s Mike Krzyzewski. During his 43 years at Syracuse, Boeheim has led the team to a national title in 2003 and five Final Four appearances.