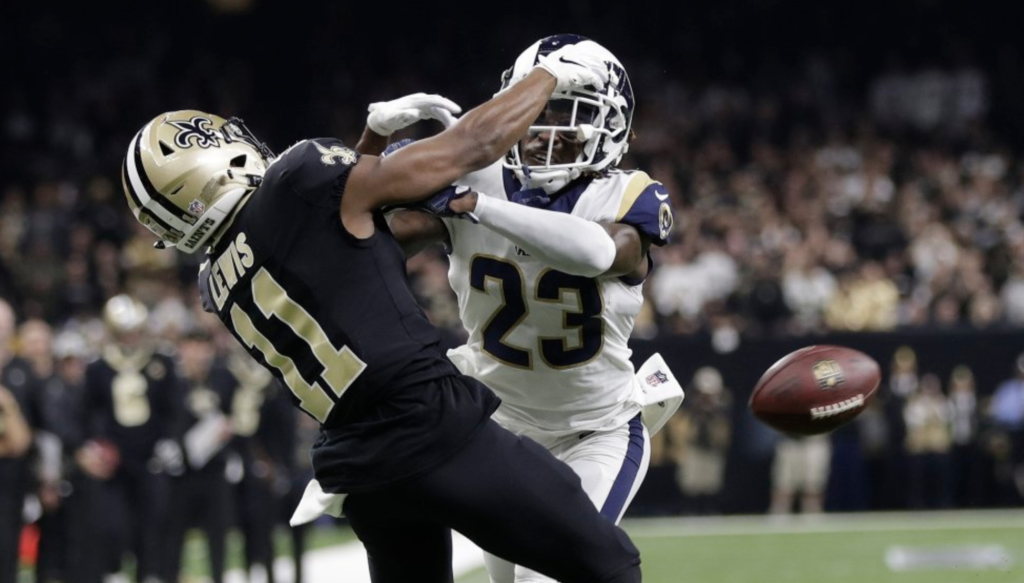 The NFL owners voted on Tuesday evening to approve a rule proposal that allows for offensive and defensive pass interference, including non-calls, to be subject to review.

This rule change is only for the 2019 season.

Coaches will still have only two challenge flags.

This decision comes a day after New Orleans Saints coach Sean Payton said that the competition committee agreed to an amended rule-change proposal (6B), in which coaches would be allowed to challenge offensive and defensive pass interference even if there was no flag on the play. The rule change that passed on Tuesday night is considered 6C.

The reviewability of pass interference calls and non-calls came to the forefront after the NFC Championship Game in January, when Los Angeles Rams cornerback Nickell Robey-Coleman hit Saints receiver Tommylee Lewis early on a third-down play late in the fourth quarter. No penalty was called on the play. The Rams went on to win the game and make the Super Bowl.

The aftermath prompted outrage from Saints fans, coaches and brass, including owner Gayle Benson, who went as far to release a statement on the non-call.

“This is what I wanted to happen. That’s why I made my statement,” Benson told reporters, per NFL Network Insider Ian Rapoport “[The non-call in the NFC title game] will never happen again.”

“We think it was a good change,” Payton told reporters. “We’re trying to address the two fouls that most impact games. … The last three years coaches are being a little bit more judicious with their challenges. I think that will continue especially the minor fact that you now have a more meaningful play you can challenge.

The one-year rule change wasn’t just about pleasing the aggrieved Saints. NFL Commissioner Roger Goodell told reporters that it was important that teams came to a consensus on expanding replay review.

“I personally believe it was the fact that every club wanted to get, and the league wanted to get these plays right,” Goodell said at a press conference immediately following the vote. “Replay is to get it right. And ultimately people compromised, I think, on long-held views because they want to get the system right. They want to get the play right.”

The mandate delivered by ownership to approve this expansion of replay review comes as a surprise. As early as the start of the Annual League Meeting, approving review of pass interference calls was considered a “non-starter” on the competition committee, Rapoport reported.

Coaches were reportedly the driving force behind a deeper consideration of the rule proposal, namely Payton, Cowboys coach Jason Garrett, Patriot scoach Bill Belichick and Chiefs coach Andy Reid. The latter two reportedly advocated for extending a meeting between coaches and the competition committee on Monday evening to consider and then amend the original proposal.

“Replay has an important tool for us. It wasn’t able to correct something we wanted to have corrected in the past. That to me was the driving force at the end of the day,” Goodell said. “Our job is to get these right and we should use every available means to get them right. Replay is a great means to be able to do that.

“Will this solve every problem? Will this get us to perfect? It’s the old saying, right? Don’t let perfect get in the way of better. This is a very natural evolution and obviously a very positive thing.”