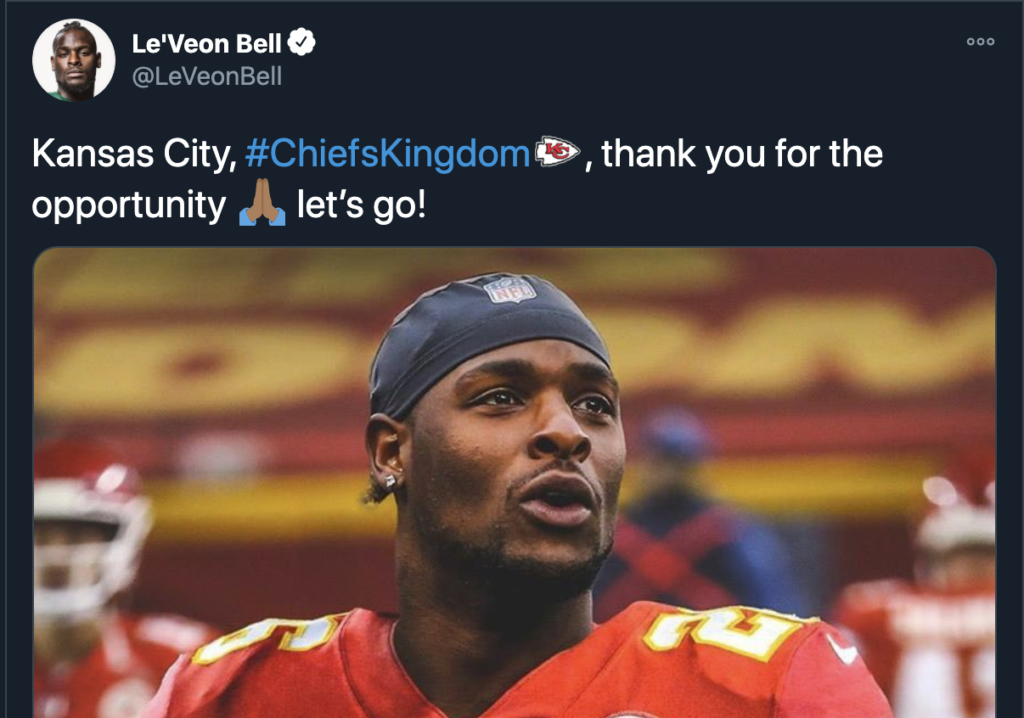 The Rich Get Richer

Le’Veon Bell is moving on from a winless squad to the reigning Super Bowl champions.

“Kansas City, Chiefs Kingdom, thank you for the opportunity,” Bell tweeted not long after the news. “Let’s go!”

A three-time Pro Bowl and two-time All-Pro selection with the Pittsburgh Steelers during a time that seems so long ago now, Bell’s run with the Jets was far from a good fit and came and went with little production or success. Now, Bell — revered for his versatility running through the tackles and catching out of the backfield, during his Steelers days — joins Andy Reid’s offense in Kansas City, which would seem to be a perfect fit for him as he’s an added threat to an explosive offense and a compliment to rookie running back Clyde Edwards-Helaire﻿.

The Chiefs were not the only team interested in Bell’s services, as the Miami Dolphins and Buffalo Bills were also in the mix. Kansas City, however, was close to getting a deal agreed to on Tuesday night, but the agreement finally came on Wednesday.

For as swiftly as Bell, 28, found a new club, it will take him more time to join them, however. The veteran back will not be able to play in the Chiefs’ Week 6 game against the Buffalo Bills on Monday as he’ll need to go through six days of COVID-19 protocols and should then be able to practice next week, Pelissero reported. The timeline is dependent upon when the deal is officially finalized to then shore up when “Day 1” is for Bell with the Chiefs and him then going forward with protocols.

However, Bell should be ready to go by Week 8, when the Chiefs face his old team, the Jets, on Nov. 1.

Upon first reaction, the Patrick Mahomes﻿-led Chiefs have themselves another weapon for an already outstanding offense, with Bell having once been one of, if not the, best backs in the game. While the Chiefs are third in total offense, they are just 13th in rushing in the league. Might Bell ring true to his former form and become an in-season signing that makes the rich even richer?

At his best, Bell has tallied a career-high 2,215 scrimmage yards and 1,391 rushing (in 2014) and had a league-high 406 touches (2017). But that was in his past life in Pittsburgh. In his time with the Jets, he averaged a miniscule 3.3 yards per carry and never had a game in which he had multiple touchdowns or 100 yards rushing.

Following a season-long holdout in 2018 when still under the Steelers umbrella, Bell moved on to the Big Apple and found a rocky marriage almost from the onset. Marked by short runs, little production, disharmony with coach Adam Gase and his offense, Bell wanted out and got just that when he was released by the Jets earlier this week. It came after the team shopped him in a trade and found nobody willing to take on his lucrative contract.

Since leading the football world with the aforementioned 406 touches in 2017, Bell has played in just 17 games out of a possible 37, having sat out 16 to end his Pittsburgh run and missed four with New York due to injury.

Bell moves on from an 0-5 Jets team to a 4-1 Chiefs squad that’s in first place and aiming to defend a Super Bowl crown.

In Kansas City, he’ll find a friend in Chiefs DT Chris Jones﻿, arguably the game’s best quarterback to throw and hand off to him and an offense that would seem to stupendously suit him. The question will linger until Bell returns to action as to whether the back who once terrorized opposing defenses will return to the field when he joins his third team in three seasons.

Another new dawn is ahead for Bell. We shall see if it’s the right one this time.