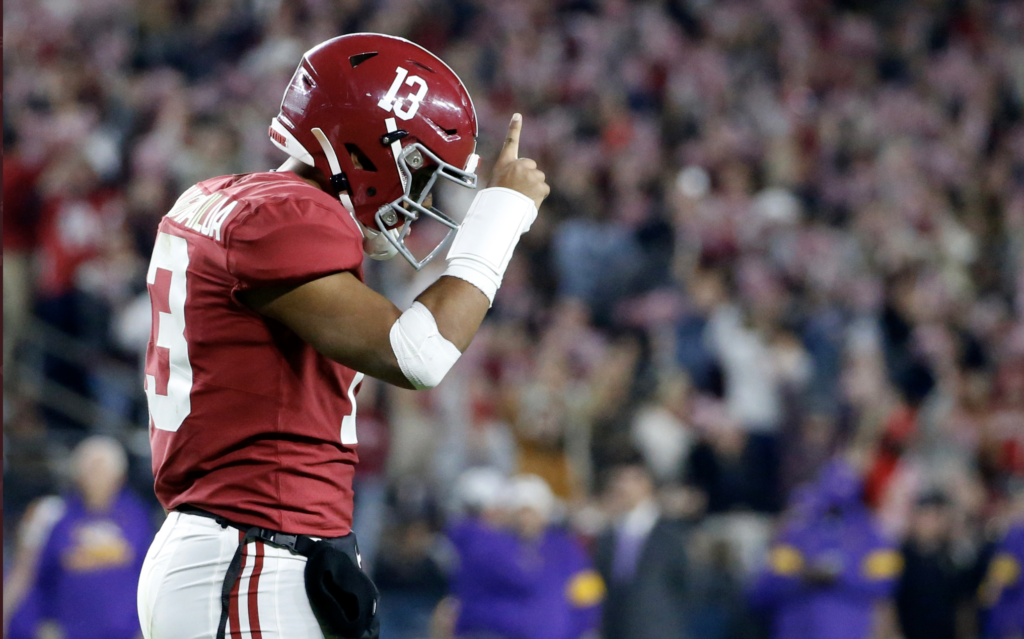 Time To Get Paid!

Alabama quarterback Tua Tagovailoa, a projected top-10 pick who is recovering from major hip surgery, will skip his senior season and enter the NFL draft.

The former Heisman Trophy runner-up announced his decision during a news conference on Monday at the Mal Moore Athletic Facility on campus.

“With lots of prayers, thoughts and guidance I have decided that I will enter the 2020 NFL draft,” Tagovailoa said Monday.

Alabama coach Nick Saban sang Tagovailoa’s praises Monday, adding that the QB is on pace to graduate on time.

“Tua has probably had as much of an impact on our football program here as anyone we’ve ever had,” Saban said.

“It was a hard decision all around,” Tagovailoa said.

Tagovailoa dislocated his hip during a Nov. 16 game against Mississippi State. He had surgery shortly thereafter and has been rehabbing with the team since.

Alabama team orthopedic surgeon Lyle Cain previously told ESPN that Tagovailoa wouldn’t be able to resume athletic activity until around mid-February and won’t be ready to begin throwing again until sometime in the spring.

Despite those medical concerns, ESPN’s Todd McShay had the Miami Dolphins selecting Tagovailoa with the fourth overall pick in his latest mock draft. ESPN’s Mel Kiper Jr. had him rated third overall in his latest Big Board.

Tagovailoa was still feeling the effects of a surgery to repair a high-ankle sprain at the time of his hip injury, which he suffered when two Mississippi State defenders landed on him as he was rolling out for a pass play. He fell awkwardly and his knee drove into the ground, causing his hip to dislocate and his posterior wall to fracture. He also broke his nose and sustained a concussion on the play.

Tagovailoa burst onto the scene when he came off the bench as a true freshman and led Alabama to a win in the 2017 CFP National Championship Game against Georgia. He went on to beat out Jalen Hurts for the starting job and throw a combined 76 touchdowns and nine interceptions the last two seasons. He was the runner-up to Oklahoma QB and eventual No. 1 overall draft pick Kyler Murray in the 2018 Heisman race.

A few weeks after undergoing hip surgery, Tagovailoa spoke with the media about his future, saying there would be “risk-reward” whether he returned to school or entered the draft.

Regardless, he said his goal was to play football in 2020, wherever that may be.

“This isn’t something that I can rush,” he said. “If I want to play to my full potential, I know I can’t just come back and play on it as if it were my ankle.”

Saban said after his team’s Citrus Bowl win earlier this month that his job – like with any Tide draft prospect – was getting the best information to the player.

“I think it’s our responsibility and our job to make sure that we give them all the information from an NFL standpoint, from a medical standpoint, from a rehab standpoint,” Saban said. “And if there is any way that he could possibly be devalued because of his injury, what are the consequences of that and how does that affect his decision and what he does in the future.

“But he’s been a great leader for us. He’s a great player on our team. He was elected captain of the team by his teammates. And we just want what’s best for him.”

Alabama has several quarterbacks still on the roster, including Tagovailoa’s younger brother, freshman Taulia, and redshirt sophomore Mac Jones, who started four games in place of Tagovailoa, including the Citrus Bowl win against Michigan.

Jones was 3-1 in games he started, throwing a combined 13 touchdowns and two interceptions.

Incoming freshman Bryce Young, the No. 1-ranked dual-threat quarterback in the 2020 Class according to ESPN, arrived on campus this week as well.

Middle linebacker Dylan Moses and offensive lineman Alex Leatherwood — both possible first-round picks — have announced that they will return next season.

Alabama has a few high-profile games to start next season, including the opener against USC in Arlington, Texas, on Sept. 5, and a Week 3 game at home against Georgia on Sept. 19.