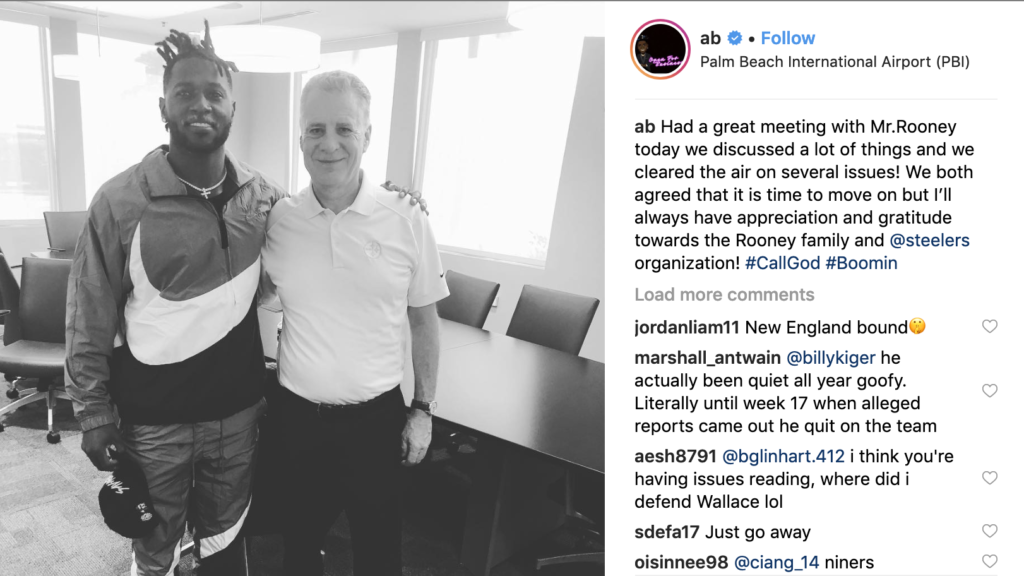 Antonio Brown tweeted that he met Tuesday with Pittsburgh Steelers president Art Rooney II and that the sides “both agreed that it is time to move on.”

The meeting was cordial and “everyone agreed the trade will be for the best,” a source told Schefter.

Brown tweeted that it was a “great meeting” and that he and Rooney “cleared the air on several issues.”

The tweet followed an Instagram video posted Tuesday morning by Brown, who said he’s not playing without more guaranteed money and reinforced his desire to be traded by the Steelers.

“If your squad out there want to win and your squad want a hungry wide receiver who’s the best in the whole world, someone hit my phone,” Brown said into his phone camera while working on an elliptical. “Tell them I ain’t doing no unguarantees. I ain’t even gonna play myself no more for this NFL, you heard.”

Brown has no more true guarantees left on his current deal. The five-year, $72.7 million extension he signed in 2017 includes base salaries of $12.625 million, $11.3 million and $12.5 million. Those relatively modest numbers are considered a selling point in a trade. Brown is due a $2.5 million roster bonus on March 17, but the Steelers could avoid payment by trading or releasing him before that date.

NFL contracts can be reworked, so Brown can ask a new team to convert salaried money into guarantees — a strategy the Steelers used twice with Brown in the past, converting future money into a signing bonus. But teams hold the power since he’s under contract. Brown’s only true leverage is threatening to hold out.

Brown turns 31 in July, and the Steelers are making receiver JuJu Smith-Schuster a focal point in the offense. The team would take on $21.12 million in dead money by releasing or trading Brown but would offset that money by saving on his $22.165 million salary-cap figure for 2019.

Brown, who said he’d like to be known as “Mr. Big Chest” from now on, remains unfazed.

“I think I done done everything. What y’all think? What’s left for me to do?” Brown said. “Win a Super Bowl? Hey, gotta be the right team for that, right? Who wants smoke? I’ve got a lot of fuel built up. When this fuel turns to smoke, hope you’re in shape, hope you’re ready to go the distance. I’m telling you, I’m ready to go 36 rounds, like a heavyweight, ya heard. …

“If your team got guaranteed money, tell them call me. AB can’t do no more unguarantees. So we clear. I want ya’ll to be clear and understand something. This is not a game, people. This is not for show; this is not to be cool. This is strictly to inspire you that no one can determine your destination but you.”

Brown placed his trade request last month. The Steelers will want a high draft pick in return for Brown, who holds an NFL record with six consecutive 100-catch seasons.

Brown is doing his best to apply public pressure on the Steelers, thanking fans for nine years with the team and fielding questions on Twitter. In a Q&A session Saturday, Brown said Steelers quarterback Ben Roethlisberger has an “owner mentality” for calling out players and coaches without repercussion and that coach Mike Tomlin told the team Brown quit in Week 17 while he was hurt.