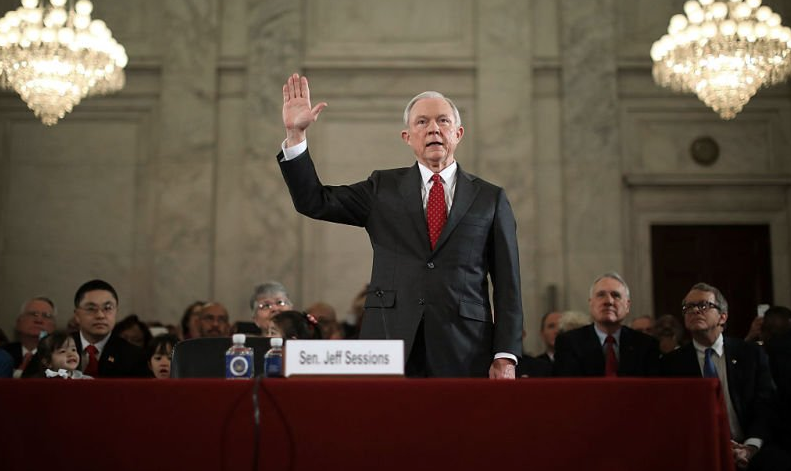 What Is It With These Folks and the Russians?

Donald Trump’s attorney general Jeff Sessions twice spoke with the Russian ambassador to the United States during the presidential campaign.

The Washington Post, citing justice department officials, first reported that Sessions met with Russian ambassador Sergey Kislyak once in September 2016, when US intelligence officials were investigating Russian interference in the presidential election, and once in the summer of that year.

It was communications with Kislyak that led to the firing of Trump’s first national security adviser, Michael Flynn, in February.

A spokeswoman for Sessions confirmed that the meetings took place, but provided a statement from the attorney general saying they were not related to the election campaign.

“I never met with any Russian officials to discuss issues of the campaign,” Sessions’ statement said. “I have no idea what this allegation is about. It is false.”

Sessions reiterated on Thursday morning that he had “not met with any Russians at any time to discuss any political campaign”, in an interview with MSNBC’s Morning Joe.

Sessions, a former senator from Alabama who was among Trump’s early and most vocal surrogates on the campaign trail, did not disclose the conversations when asked under oath during his Senate confirmation hearing in early 2017 about possible contacts between Trump’s campaign and Moscow.

Nancy Pelosi, the House Democratic leader, called for Sessions’ resignation. “After lying under oath to Congress about his own communications with the Russians, the attorney general must resign,” she said.

“Sessions is not fit to serve as the top law enforcement officer of our country and must resign. There must be an independent, bipartisan, outside commission to investigate the Trump political, personal and financial connections to the Russians.”

The White House swiftly rejected the reports as an effort to undermine Trump’s speech before Congress on Tuesday night, which was reviewed favorably by the US media despite signaling no substantive shift in policy.

“Sessions met with the ambassador in an official capacity as a member of the Senate armed services committee, which is entirely consistent with his testimony.”

When Sessions was asked during his 10 January testimony to the Senate judiciary committee how he would respond if he learned of communications between the Trump campaign and Russian officials leading up to the election, he said he was “not aware of any of those activities”.

He added: “I have been called a surrogate at a time or two in that campaign and I did not have communications with the Russians.”

While the committee was considering his nomination, the panel’s top Democrat, Senator Patrick Leahy, also raised the issue of communications with Russia in a written questionnaire.

“Several of the president-elect’s nominees or senior advisers have Russian ties,” Leahy wrote, before asking Sessions point-blank: “Have you been in contact with anyone connected to any part of the Russian government about the 2016 election, either before or after election day?”

Sarah Isgur Flores, a spokeswoman for Sessions, denied he had deceived the Senate. “There was absolutely nothing misleading about his answer,” Flores said in a statement, noting Sessions had over 25 conversations with foreign ambassadors last year.

“He was asked during the hearing about communications between Russia and the Trump campaign – not about meetings he took as a senator and a member of the armed services committee.”

The Washington Post said it had asked all 26 members of the committee whether they had met Kislyak last year. None of the 20 who replied, including committee chair John McCain, had done so, it reported.

Adam Schiff, the top Democrat on the House intelligence committee, called for Sessions to recuse himself from any investigation into contacts between the Trump campaign and Russia.

“If reports are accurate that Attorney General Sessions – a prominent surrogate for Donald Trump – met with Ambassador Kislyak during the campaign, and failed to disclose this fact during his confirmation, it is essential that he recuse himself from any role in the investigation of Trump campaign ties to the Russians,” Schiff said.

Asked by MSBNC on Thursday whether he would recuse himself from any investigations, Sessions said: “Well I have said whenever it is appropriate I will recuse myself, there’s no doubt about that.”

“It is inconceivable that even after Michael Flynn was fired for concealing his conversations with the Russians that Attorney General Sessions would keep his own conversations secret for several more weeks,” Cummings said, adding Sessions’ testimony was “demonstrably false”.

“Yet he let it stand for weeks – and he continued to let it stand even as he watched the president tell the entire nation he didn’t know anything about anyone advising his campaign talking to the Russians.”

The revelation comes just two weeks after the resignation of Michael Flynn, who served as Trump’s national security advisor until it was revealed he discussed US sanctions against Russia with Kislyak in December and misled Vice-president Mike Pence about the nature of his communications.

As the new attorney general, Sessions will have significant oversight of an investigation by the FBI into Russia’s role in the US election and any links to associates of Trump. The Senate and House intelligence committees are each conducting their own separate inquiries into the matter.

Senator Lindsey Graham, a Republican from South Carolina, said Sessions should recuse himself from the FBI investigation.

“If there is something there, and it goes up the chain of investigation, it is clear to me that Jeff Sessions, who is my dear friend, cannot make this decision about Trump,” Graham said during a joint CNN townhall with Arizona Senator John McCain late on Wednesday.

Most Republicans have resisted calls to have an independent, select panel investigation the issue, arguing that the intelligence committees can be trusted to oversee the inquiries that were launched shortly after US officials accused Russia of meddling in the American election. But Democrats have called into question whether Trump’s own party, which controls both chambers of Congress, will conduct a fair and thorough investigation.

Minnesota Senator Al Franken, the Democrat who raised the issue of possible ties between Trump’s campaign and the Russians in Sessions’ confirmation hearing, also called on the attorney general to recuse himself from any ongoing investigation.

Franken said: “I am very troubled that his response to my questioning during his confirmation hearing was, at best, misleading.

“The American people deserve to know the truth about what happened between Russia and the Trump team … It’s clearer than ever now that the attorney general cannot, in good faith, oversee an investigation at the department of justice and the FBI of the Trump-Russia connection, and he must recuse himself immediately.”

Trump’s friendly posture toward Russia has sounded alarms across the US and frequently proved a source of consternation among members of his own party.

The president has routinely praised his Russian counterpart, Vladimir Putin. Following his victory in November, Trump nominated Rex Tillerson as his secretary of state – a former CEO of ExxonMobil with close ties to Russia.

Trump’s administration has also refused to categorically rule out lifting sanctions imposed against Russia by the Obama administration, prompting bipartisan efforts to ratify those sanctions into law.