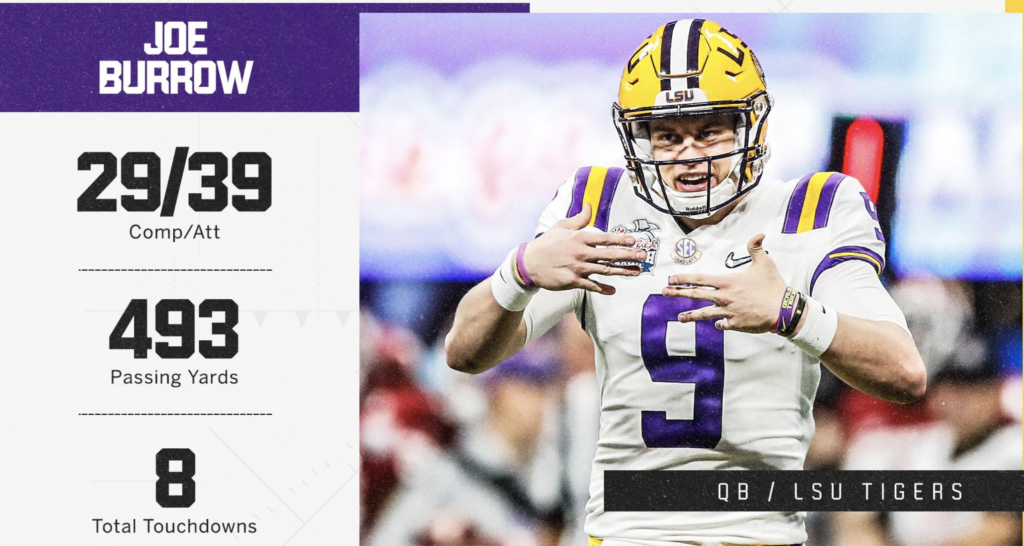 Joe Burrow turned in the greatest performance yet in his Heisman Trophy season, throwing for seven touchdowns and 493 yards as No. 1 LSU romped to a breathtaking 63-28 victory over No. 4 Oklahoma in the Peach Bowl semifinal game Saturday.

The Tigers (14-0) headed to the national championship game against either No. 2 Ohio State or No. 3 Clemson clicking on all cylinders, having dismantled the Sooners (12-2) with a first half for the ages.

Burrow tied the record for any college bowl game with his seven TD passes — which all came before the bands hit the field for the halftime show at Mercedes-Benz Stadium. Justin Jefferson was on the receiving end for four of those scoring plays, also tying a bowl record.

For good measure, Burrow scored an eighth TD himself on a 3-yard run in the third quarter, thoroughly dominating his expected duel with Oklahoma quarterback Jalen Hurts, the Heisman runner-up.

All that as the Tigers played with heavy hearts. Shortly before the game, LSU offensive coordinator Steve Ensminger learned that his daughter-in-law, broadcaster Carley McCord, was among five people killed in a plane crash in Louisiana.

The small plane went down shortly after takeoff for what was supposed to be a flight to Atlanta for the game.

Ensminger had tears running down his cheeks during warm-ups, but he was in his usual spot high above the field when the game kicked off, calling plays along with passing game coordinator Joe Brady.

It was a brilliant, poignant performance in the face of such tragedy.

LSU needed only three plays to race 42 yards for its first score – a perfectly thrown ball over Jefferson’s shoulder for a 19-yard TD less than 3 minutes into the game.

Oklahoma briefly put up a fight. Hurts’ 51-yard pass to CeeDee Lamb set up a 3-yard touchdown run by Kennedy Brooks that tied the score at 7.

After that, the rout was on.

The Tigers’ potent spread offense made this one look much like the Harlem Globetrotters carving up the Washington Generals, only it was the Sooners playing the hapless victim. At times, it was hard to tell if Oklahoma was actually trying, but that was merely a reflection of Burrow’s precision and the excellent protection that gave him plenty of time to throw.

Jefferson hauled in a 35-yard pass for touchdown No. 2. Then a 42-yarder for No. 3. And, finally, a 30-yard scoring strike that left him counting off four fingers for the crowd — all before the midway point of the second quarter.

Terrace Marshall Jr. contributed to the onslaught with TD catches of 8 and 2 yards. Tight end Thaddeus Moss — the son of NFL Hall of Fame receiver Randy Moss — made his daddy proud by getting free behind the secondary, hauling in a pass and shoving off a fast-closing defender to complete the 62-yard scoring play.

“What a tremendous job by everybody,” Orgeron said. “One team, one heartbeat. Everybody in our organization. We got tremendous play by Joe Burrow and have a great coaching staff.”