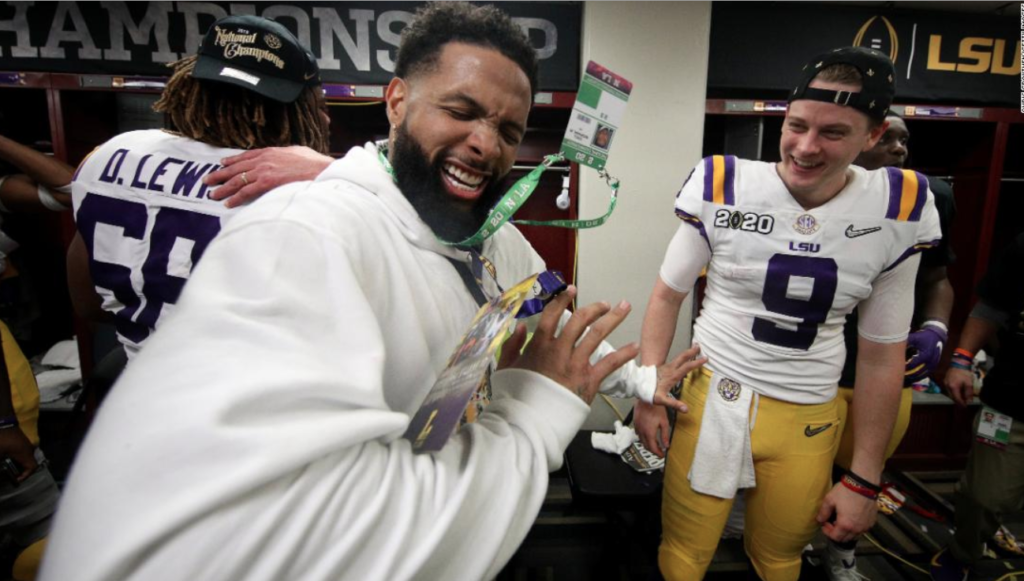 Video surfaced this week showing Beckham slapping the buttocks of a Superdome security guard in the LSU locker room after the Tigers’ national championship victory over Clemson on Monday in New Orleans.

According to records obtained by NOLA.com, the security guard had been telling LSU players to put out cigars in the locker room before he was slapped.

Louisiana statute defines simple battery as battery committed without the consent of the victim. Punishment in Louisiana can include a fine of no more than $1,000 and imprisonment for no more than six months, or both.

“We are aware of the incident and have been in touch with Odell and his representatives on the matter,” the Browns said in a statement issued Thursday. “They are cooperating with the proper authorities to appropriately address the situation.”

Beckham was also captured on video passing out money to several LSU players immediately after the Tigers’ 42-25 victory.

The university’s athletic department issued a statement Wednesday, saying it was aware of video showing “apparent cash” being given to players by Beckham and that it has been in contact with the NCAA and the Southeastern Conference regarding the matter.

“We are aware of the situation regarding Odell Beckham Jr. interacting with LSU student-athletes and others unaffiliated with the team following the championship game Monday night,” the LSU statement said. “Initial information suggested bills that were exchanged were novelty bills. Information and footage reviewed since shows apparent cash may have also been given to LSU student-athletes.

An LSU spokesperson on Tuesday morning initially had told the Baton Rouge Advocate that the money being handed out on the field by Beckham, a former LSU star, was not real.

But on the Barstool Sports “Pardon My Take” podcast, LSU quarterback Joe Burrow said the cash was real. If the money being doled out by Beckham was real, it would be a violation of NCAA bylaws. Cash is an example of impermissible benefits that are prohibited by the governing body.