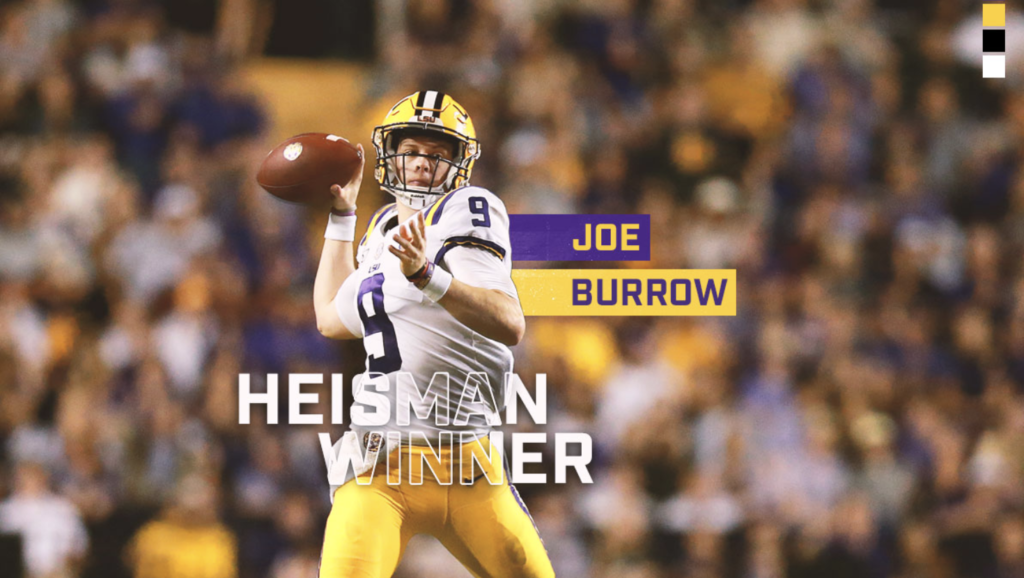 And With The First Pick in The NFL Draft

Burrow, who is on pace to set an FBS single-season record for completion percentage (.779) and has 48 touchdowns to six interceptions on the year, is the fourth straight quarterback to win the award and the 12th to win it in the last 14 seasons. He is the second Heisman Trophy winner in LSU program history and the first since Billy Cannon earned the honor in 1959. Burrow is also the first SEC quarterback to win the Heisman since Texas A&M’s Johnny Manziel in 2012.

Burrow’s victory shouldn’t come as a surprise to anybody who had been paying attention this season. He was such a heavy favorite heading into Saturday night’s ceremony that many sportsbooks stopped accepting wagers on the Heisman winner. It wasn’t so much a question of whether Burrow would win but rather how much of a margin he would carry.

As it turns out, Burrow won by the largest margin in the history of Heisman voting. His 2,608 points were 1,846 more points than second-place finisher Jalen Hurts. The previous record was held by O.J. Simpson, who finished 1,750 points ahead of runner-up Leroy Keyes of Purdue in 1968.

And just in case all those records aren’t enough, Burrow is also the first Heisman winner in history to wear No. 9.

After beginning his college career at Ohio State, Burrow transferred to LSU as a graduate student with two years of eligibility remaining ahead of the 2018 season. His first year with the Tigers was good but nothing like what we saw in 2019. He finished the 2018 season with 2,894 yards passing, 16 touchdowns and five interceptions. Then LSU overhauled its offensive philosophy, and Burrow took off. His 48 touchdowns on the season are not only an LSU school record but an SEC record, as are his 4,715 passing yards.