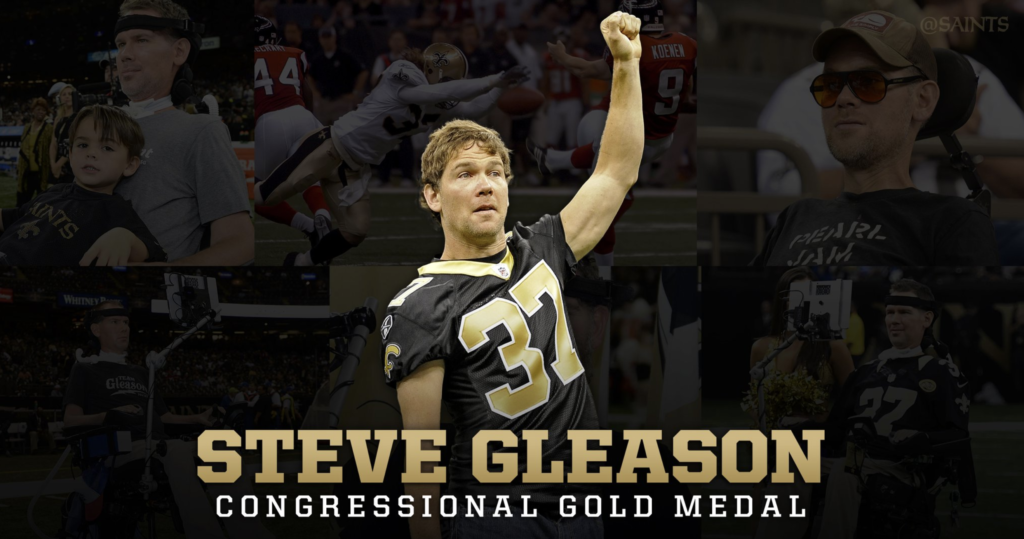 Who Dat Nation Stand Up!

Former New Orleans Saints defensive back Steve Gleason has inspired countless people worldwide throughout his battle with Amyotrophic Lateral Sclerosis (ALS) and his work in the areas of research associated with the disease.

On Thursday, the U.S. House of Representatives passed legislation to award Gleason the Congressional Gold Medal — the highest honor Congress can bestow upon a civilian — for his efforts. The U.S. Senate unanimously endorsed the award for Gleason in June, and now the final step is for President Trump to sign the legislation.

“It is a true honor to witness Steve Gleason become the first New Orleanian and former NFL Legend to receive the Congressional Gold Medal,” Saints owner Gayle Benson said in a statement. “Along with his wife, Michel, and everyone at Team Gleason, they have unfailingly confronted ALS with a courageous and unwavering determination. Their tireless work to provide crucial assistance and the latest in technology and services has improved countless people’s quality of living. Steve is leaving a truly indelible mark in American history and we are honored to call him a true New Orleans Saint.”

Gleason would be the first NFL player ever honored with the Congressional Gold Medal.

Legislation to award Gleason the Congressional Gold Medal initially was introduced in the Senate and House back in April by Sen. Bill Cassidy, M.D. (R-LA).

“Through his work to help others who are disabled, Steve Gleason has changed so many lives for the better,” Cassidy said in a statement Thursday. “As more members of Congress heard about Steve’s work, the support for this bill only grew. Steve is a hero to many and I’m proud we got this done to honor a great American.”

Gleason spent seven years as a defensive back and special teams star for the Saints and has battled ALS since 2011. Gleason memorably helped organize the ALS Ice Bucket Challenge in 2014, which raised awareness and generated more than $100 million to fight the disease.