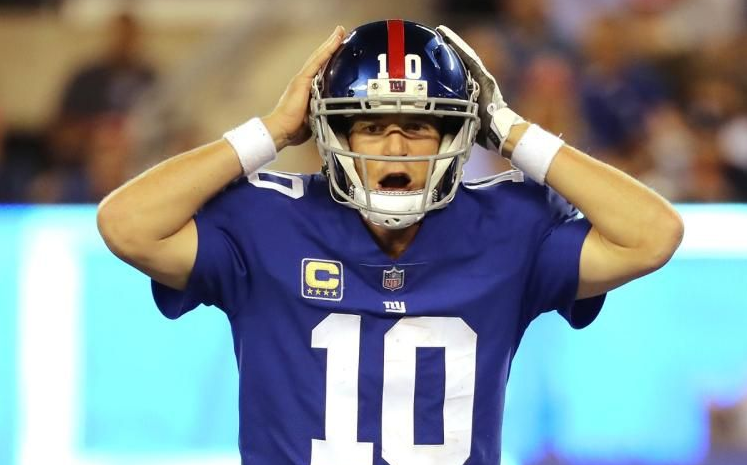 Monday night’s loss to the Detroit Lions exposed some of the deeper issues brewing beneath the surface in New York.

Yes, left tackle Ereck Flowers is struggling mightily and allowed three sacks to Lions player of the game Ezekiel Ansah. But … quarterback Eli Manning is holding on to the ball for way too long in a desperate effort to make something happen.

Yes, the Giants can build in tight end protections that give Flowers help against outside edge rushers. But … that decreases the number of eligible receivers running routes, and the ones who are running routes are either injured and on a snap count (Odell Beckham) or dropping passes and not quite accustomed to the offense (Brandon Marshall).

Head coach Ben McAdoo pointed all of this out on Monday in his postgame interview, though one quote will inevitably rise to the surface. McAdoo called Manning “sloppy” for not being able to get a snap off on a fourth-and-goal attempt, forcing the Giants to kick a field goal.

“Sloppy quarterback play,” McAdoo said. “Quarterback and the center need to be on the same page there. We need to get the ball snapped.”

He was right, but it’s important to listen to everything McAdoo said. He’s not just throwing the quarterback under the bus, he’s throwing himself under the tires as well. He’s throwing the offensive line in there, the wide receivers and special teams. Don’t let faux outrage about the new coach in towncriticizing the tenured, two-time Super Bowl winning quarterback obscure the fact that McAdoo knows there is potential for a full-blown meltdown on his hands.

The Giants have now gone eight straight weeks dating back to last season without scoring 20 points. As ESPN pointed out Tuesday morning, it’s the first time in the franchise’s history the team lost back-to-back games to start the season by 14 points or more.

Given how these issues have the propensity to snowball, it should at least be encouraging to Giants fans that their coach seems unafraid to point out anyone’s mistakes, including his own. With a game against the Eagles in Philadelphia on deck, that sort of blunt self-assessment might be necessary to snap the team out of this funk.