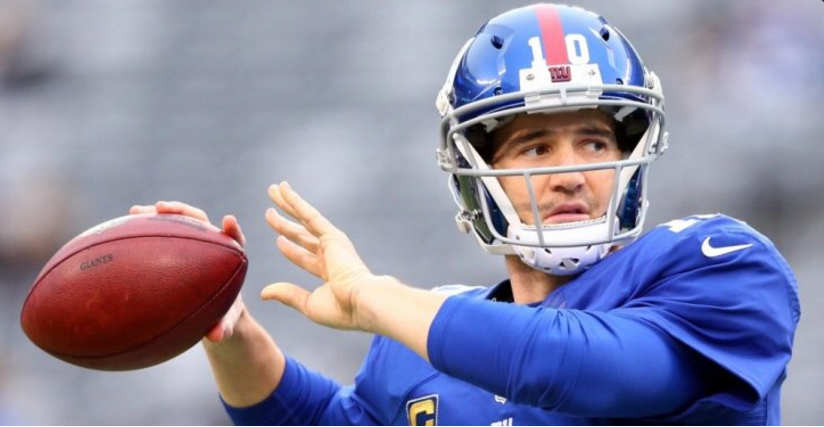 Eli Manning In Memorabilia Scheme? Say It Aint So

Eli Manning turned over a potentially incriminating email earlier this month in connection with a lawsuit that claims the quarterback, the New York Giants and a team equipment manager knowingly provided false game-worn memorabilia to collectors.

The email was included in a court filing in Bergen County (N.J.) Superior Court by the plaintiffs — collectors Eric Inselberg, Michael Jakab and Sean Godown — who first filed suit three years ago.

On April 27, 2010, Manning sent an email to Giants head equipment manager Joe Skiba asking for “two helmets that can pass as game used.” The email was initiated after Manning was sent a note by Alan Zucker, his marketing agent throughout his career, to come up with some equipment to satisfy his obligation to provide such materials to sports memorabilia company Steiner Sports.

The plaintiffs’ lawyer, Brian Brook of Clinton, Brook & Peed, told ESPN that the email, included among roughly 200 pages of documents Manning produced as part of legal discovery, was key to specifically linking the quarterback to the lawsuit, which alleges an elaborate scheme to produce, pass off and sell memorabilia as game-used that was not.

Prior to that email, the lawsuit had included only an alleged conversation between Manning and Skiba to put together some equipment that could be described as game-used. The lawsuit alleges that Manning not only had been aware of the passing off of inauthentic items of his as game-used but also was party to their creation.

The suit also alleges that the Giants were complicit by deleting the email from their accounts.

“The email, taken out of context, was shared with the media by an unscrupulous memorabilia dealer and his counsel who for years has been seeking to leverage a big payday,” McCarter & English, the law firm representing the Giants in the case, said in a statement. “The email predates any litigation, and there was no legal obligation to store it on the Giants server. Eli Manning is well known for his integrity and this is just the latest misguided attempt to defame his character.”

The release of the email to the public record through the filing was first reported by the New York Post.

Brook said that, based on what he believes was the Giants’ cooperation with authorities, his client, Inselberg, was one of six memorabilia dealers indicted for selling fake game-used items after an FBI investigation. The charges against Inselberg were dropped when the Justice Department admitted it lacked evidence, and Inselberg, believing his reputation was greatly damaged, then filed the lawsuit against the Giants.

The Giants conducted an internal investigation in 2011 into their selling and producing of game-used memorabilia.

The plaintiffs’ claim around that specific investigation has been dismissed, but Brook is still arguing that the results of the investigation should be admissible in court. Brook said the Giants have subpoenaed 70 connections to Inselberg and still have not been able to find any evidence that he fabricated any memorabilia.

Inselberg, who loaned many pieces of his collection to a memorabilia collection inside MetLife Stadium, said he had purchased hundreds of game-used items directly from the Giants’ equipment managers. Inselberg alleges that he was sold many of the game-used items, including a Michael Strahan Super Bowl game-used jersey that was authenticated and photo matched, despite the fact that the Giants presented another jersey to Strahan and told him that that was his jersey from the game.

The lawsuit claims other allegedly fake items included ones described as game-used from Manning, Osi Umenyiora and Tiki Barber.

It is not likely that Manning, the Giants or their employees would be subject to criminal prosecution as the alleged actions in question have passed the federal five-year statute of limitations.

The trial is scheduled to begin on Sept. 25.