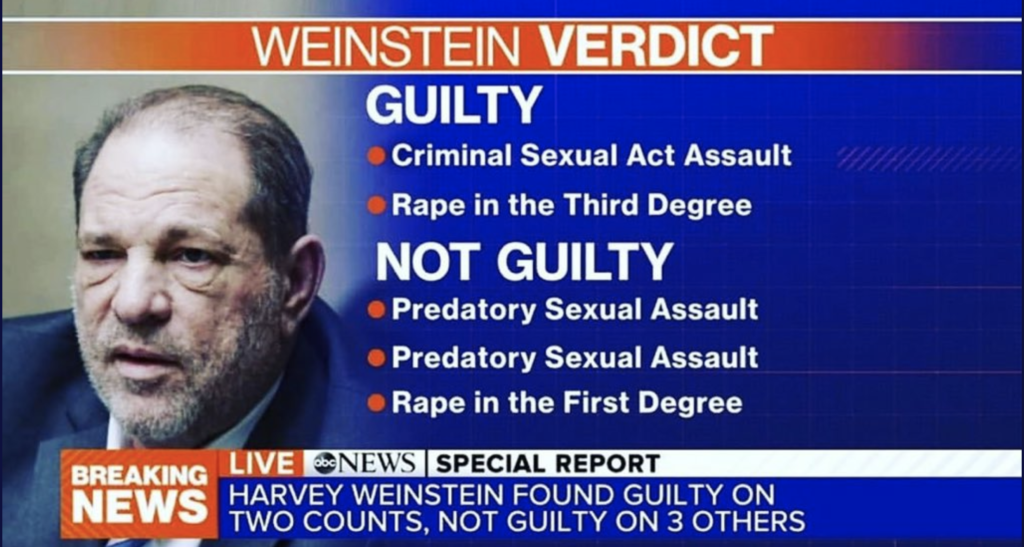 A jury of 12 men and women on Monday found former movie mogul Harvey Weinstein guilty on two of the five potential criminal charges he faced in his New York County trial.

The verdict was announced after the jury of seven men and five women spent five days deliberating on Weinstein’s fate.

He was remanded into custody against the protests of his lawyers, who cited his health, and is currently being held at Bellevue Hospital prison ward in Manhattan. Weinstein looked ashen and unstable as he was surrounded by officers who helped escort him out of the courtroom.

Weinstein is set to be sentenced on March 11. He is facing five to 25 years for the criminal sexual assault conviction and 18 months to four years for the third-degree rape conviction.

The jury was called in and dismissed shortly after 12 p.m. on Monday.

Judge James Burke thanked the jurors for their service. “Thank you for the care and concentration, concern and attention you have given to your deliberations,” he said. “You are now dismissed. You may leave the courtroom.”

On Friday afternoon, the jurors appeared to suggest that they were deadlocked on the two most serious charges Weinstein was facing — predatory sexual assault — but possibly unanimous on the three lesser charges (criminal sex act, first-degree rape, third-degree rape).

Ultimately, Weinstein was acquitted on the two counts of predatory sexual assault, each carrying up to life in prison. Those counts hinged on the testimony of Sopranos actress Annabella Sciorra, who had testified that Weinstein raped her in the winter of 1993. During their deliberation, the jurors asked to rehear her Jan. 23 cross-examination.

“Annabella Sciorra is a hero. She was brave and courageous to come forward. She was the second witness. Her testimony undoubtedly set the tone,” said attorney Debra Katz on a call with reporters after the verdict. “No one who heard the power of Annabella’s testimony could come away with anything else. Juries engage in all sorts of horse-trading. We don’t know exactly what they did in the jury room. We will know more in the days to come.”

In her own statement on Monday, Sciorra said her testimony was “painful but necessary,” adding, “While we hope for continued righteous outcomes that bring absolute justice, we can never regret breaking the silence. For in speaking truth to power we pave the way for a more just culture, free of the scourge of violence against women.”

In New York State, a person can be convicted of predatory sexual assault when a jury has determined that the person committed a first degree rape, criminal sexual act or aggravated sexual abuse against more than one other person.

While Weinstein’s lawyers said Friday they would accept a partial verdict, the lead prosecutor said she would not, and Judge Burke told the jury to “continue your deliberations.”

Speaking after the verdict, Weinstein’s top lawyer Donna Rotunno told reporters it was a “bittersweet day” and that Weinstein’s team will “absolutely be appealing” the verdict.

“We are disappointed. We knew we came in and we were down 35-0 on the day that we started this trial,” she said. “The jurors came in knowing everything they could know about this case. We couldn’t find a juror who had never heard of Harvey Weinstein. The fight is not over.”

In a separate statement, Rotunno and co-counsel Damien Cheronis said there were “extremely troubling” issues that prevented their client from having a fair trial. They also said they’re working on ensuring Weinstein is brought to the Anna M. Kross Center at Rikers Island or placed in protective custody “so that he can get the best medical supervision and care possible.”

The verdict is the capstone to a lengthy, highly charged and emotional trial that began Jan. 6 and included the testimony of six women who said — under oath — that Weinstein had sexually assaulted them over the past three decades.

Over the past few weeks, Weinstein appeared to grow more visually confident in his chances of acquittal, though during the deliberation process he refused to answer questions posed by journalists in the hallway of the courthouse.

“This is the new landscape for survivors of sexual assault in America, and this is a new day,” Vance said at a press conference after the verdict was announced, where he read the names of the six witnesses who testified against Weinstein, followed by the names of prosecutors Illuzzi-Orbon and Meghan Hast. “Eight women who have changed the course of history in the fight against sexual violence. These are eight women who pulled our justice system into the 21st century by declaring: Rape is rape, and sexual assault is sexual assault, no matter what,” he said. “Weinstein is a vicious, serial sexual predator who used his power to threaten, rape, assault, trick, humiliate and silence his victims.”

In a press conference outside the court with the attorneys who represent witnesses who testified against Weinstein, Katz said of the outcome, “Harvey Weinstein is exactly where he should be now — behind bars.”

Added attorney Douglas Wigdor, “Thank you to those women for lending a voice to those who cannot be directly heard.”

Wigdor also thanked some of the journalists who reported on Weinstein’s misconduct, including The New Yorker‘s Ronan Farrow, Jodi Kantor and Megan Twohey from The New York Times. “We would not be here without that reporting and without those sources,” he said.

Along with Time’s Up, a group of Weinstein accusers including Rosanna Arquette and Mira Sorvino who call themselves the Silence Breakers reacted to the verdict on Monday.

“Gratitude to the brave women who’ve testified and to the jury for seeing through the dirty tactics of the defense. [W]e will change the laws in the future so that rape victims are heard and not discredited and so that it’s easier for people to report their rapes,” said Arquette.